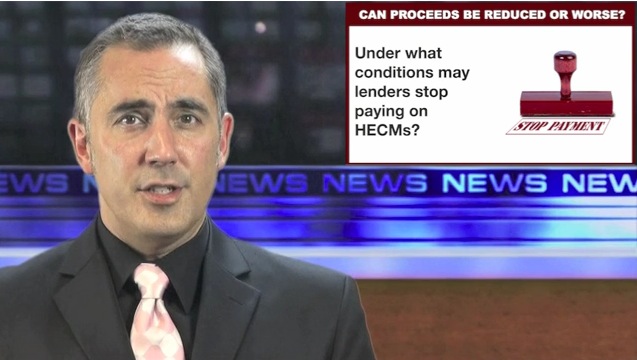 Can a lender stop or reduce monthly tenure payments to a reverse mortgage borrower? This question was posed to national real estate columnist Lew Sichelman by a 78 year old reader who had got a reverse mortgage three years earlier. Reverse Mortgage Daily contacted several industry players with the question. —-The lender cannot simply lower the tenure payment—- said Angella Conrard, reverse mortgage advisor at iReverse Home Loans. That’s true, but begs the question: under what conditions can a lender cease making payments or reduce monthly payouts? —The HECM Agreement would permit payments to be stopped under certain conditions,— according to Kenneth J. Klawans, President, iReverse Home Loans. The most obvious of those conditions would be the much publicized default for not paying property taxes and homeowner’s insurance. The question for you, our viewing audience is: What other conditions have you seen cause a borrower’s monthly payouts to be reduced or stopped? Home put up for sale on the market? Transfer of ownership to non-borrower? Tax and insurance delinquencies? Share your experience in the comment section below this video.

As the song says, When the night has come And the land is dark….stand by me. In the wake of one of the most turbulent years in our industry a little reassurance goes a long way. There was much uncertainty when Wells Fargo left reverse mortgage lending this month but should we worry? —-People certainly shouldn’t be worried—-said Vicki Bott, former Deputy Assistant Secretary for Single Family Housing at HUD. Those are good words to hear from the agency that controls the industry for the most part. But if we really want some peace of mind then we should look at the demographics. Jeffrey Lewis, CEO of Generation Mortgage, told the New York Times in their article on Wells exit —- The sheer numbers make the product’s use invevitable, noting the Baby Boomer generation’s savings is not adequate for them to retire. It is thought by many that Wells and Bank of America’s true motive to exit was reputation risk. —-Banks are really concerned about their headline and brand risk—- said Torrey Larsen, President of Security One Lending. He also added —They don’t want to risk their entire franchise by foreclosing on people, let alone grandma—- Smaller reverse mortgage only lenders do have less to loose in some respects. Wells and Bank of America had massive operations far beyond the scope of reverse mortgages which could lose public credibility if forced to foreclose on borrowers who have not met ongoing obligations. But is that really the case? Jeff Lewis counters that —the idea of reputation risk is such a canard in the hands of these institutions that I don’t even know where to start—- What Mr Lewis may be referring to is Wells Fargo’s statement that HUD would not allow them to employ some traditional underwriting which would reduce the risk of technical defaults for failure to pay taxes and insurance. As covered on this broadcast previously, HUD is working to release Financial Assessment guidelines which would help reduce the risk of non-payment of taxes and insurance for future borrowers which should be released late this year.

Notification is much different than permission. Is notification beyond the periodic statement (ex post facto — i.e., after the reduction) even required? Out of litigation concern most servicers probably do notify borrowers in advance of (or contemporaneously with) any reduction, suspension, or termination of tenure payouts. It is also good PR to notify a borrower in advance of a servicer initiated or required tenure payout reduction.

Tenure payments are not nor have they ever been for life; that is an industry myth. The payouts are not even based on life expectancy. They are based on the youngest borrower reaching age 100. That is a totally different concept. Although I have yet to see any evidence related to it, Ms. Beth Paterson claims that a HECM must terminate when the youngest borrower reaches 150 years old. If true, a tenure payout must terminate with the termination of the HECM at age 150 but Ms. Paterson has yet to cite her source.

Servicers are permitted to suspend, stop, or lower tenure payouts whenever they need cash to avoid default or protect the interests of the note owner or HUD and there are no available funds in the line of credit other than that portion set aside to make tenure payouts.

My recollection is that the note and/or the mortgage reference termination upon the youngest borrowers 150th birthday.

While agreeing with the sentiment, I do not agree with the stated position of Jeff Lewis when he is credit with saying: “The sheer numbers make the product’s use invevitable, noting the Baby Boomer generation’s savings is not adequate for them to retire.”

Here is the same voice which was credited with telling us a little over eight months ago that we would see over 100,000 endorsements this fiscal year. Jeff is a very brilliant man but a decent prognosticator he is not. As usual he makes some good points but what he says is far too transparent. He is once trying to rally the troops with cheap claims.

As an industry leader who left to stake his claim in another field said: “I am tired of hearing how things will be once the Baby Boomers come of age. Well it is happenin’ and there is no real change in the numbers.”

With ever increasing regulation, new oversight, and no significant change in home values, the growth in the endorsement numbers will be stalled for some time if not shrinking with the loss of B of A and Wells. The good news is that despite the permanent loss of some branch referrals, most lenders should see growth but will individual originators see any growth? That has yet to be determined.