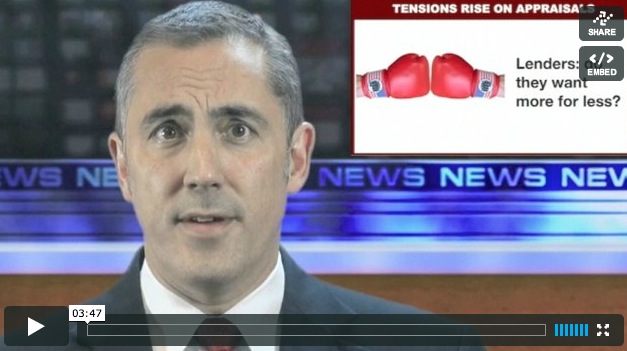 Lenders: do they want more for less? A discussion of the tensions rising between reverse mortgage lenders and appraisers.

Lenders are now required to triple verify everything and they also have 3 times the work for every loan. Our income did not increase either it decreased.

I was listening to your Friday thoughts and I was surprised by your remark about the busiest months of the year. So I looked.

What was amazing is that in the last three years FHA Outlook applicaiton numbers dropped in April for two of those years. It was not surprising when looking at it again and realizing why March 2009 fell from over 16,000 apps to under 13,750 for April 2009 when one realizes that it was in late February 2009 the Stimulus Package gave us the $625,500 lending limit. There is no easy explanation for the drop this April down below 7,375 to the lowest monthly app total this fiscal year.

April 2010 was 40% less than April 2009 while April 2011 is over 45% less than the app numbers for April 2009. If anyone has an answer why this has occurred other than continued loss in market value of homes, that explanation would be greatly appreciated.

Summer monthly app numbers have risen in the last two fiscal years and are generally between 3% -12% above the May app numbers. Let’s hope May 2011 app numbers are up, way up, and that the summer months are over 10% of the app numbers for this last month (May). We will not know the HECM app numbers most likely until sometime in the full fourth week of June when the FHA Single Family Outlook report is released with May 2011 HECM app numbers.

Not for a drop this big.

Without question the absence of B of A might have something to do with it but not much if one looks at how long it is since B of A curtailed its HECM origination operations. Remember app production for March 2011 was 20% higher than the prior March and over 8% of that over apps in February 2011 which was about the same increase in apps as for February 2010 to March 2010. So,no, the numbers and trends do not seem to agree with your shout.

By now any extreme swings in app production caused by the pull out from B of A should have been behind us.

Do you have any further insight?