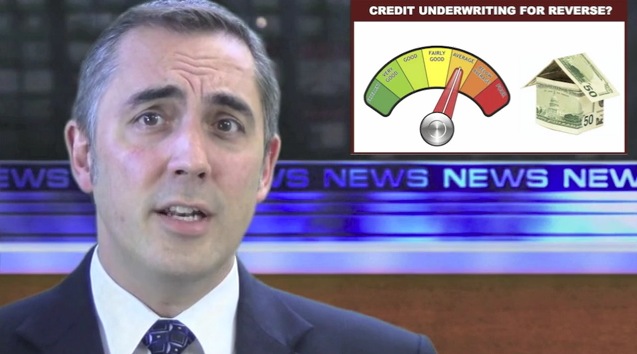 Default on taxes may NOT be creditworthiness.
It MAYBE
1. poor education by loan officer and lender. Cure simple ..clear…big print to put on refrig signing that piece of paper.
2. senior does not have the mental capacity at some point in time to pay bills.
As in VA loans, get another one or two family contact information..addresses, email and phone numbers. Lenders are notified if taxes are delinquent. The servicing dept can send an email to the client and contact people.

Once again, it means that seniors can be penalized for having met age and equity requirements but choose to limit their use of credit. If seniors have demonstrated the ability to pay for the tax and insurance on their property in the past there is no reason to suggest that they would not do the same with a reverse mortgage. Lenders will lower the loan limit, lend less money and decrease their risk. Soon seniors will be required to qualify for a reverse mortgage in the same way they would for a forward mortgage. Debt-to-income ratios, credit and equity. We’re going to kill the “goose that laid the golden reverse mortgage egg!”

This change poses a real threat to an already small segment of the Mortgage population.
Most seniors begin to logically limit new credit when approaching retirement age.
The zeal and zest for new products and as such credit minimizes with age.
Homeowners are taught from an early age that buying a home is crucial to acquiring wealth.
This is another sad phase to the struggling Mortgage industry.

The term “underwriting” denotes the idea of “qualification”. “Qualification” denotes that there must be some limiting factors that need to be met in order to “qualify”. I am going to go out on a limb and suggest that , from the senior borrowers point of view, these will probably not be in their favor. The question is: Will this underwriting be broad, conceptional underwriting guidelines or specific, unflexible rules. I have had borrowers that wanted to age in place (in their home where they raised their family) and they showed no financial ability above the reverse mtg proceeds to meet T& I payments. However, their children are very wealthy and want to keep the homes in the families. The childrens finances have nothing to do with my borrowers. Strict underwriting guidelines would work against these borrowers but FHA Ins pool is certainly not at risk. My hope is that we will have opportunity for comment before final rules are implemented.

One of the major pluses of a reverse is NO CREDIT qualification. As long as the senior has been paying insurance and taxes, there is no indication that it will not continue into the future. Remember that Mr. Stevens has already reduced PLF by 10% and raised MI thus giving FHA an additional pillow. There is no empirical or anecdotal data to indicate that upon turning 62 a person instantly (or over time) becomes financially incapable as FHA seems to think. The reverse mortgage has been a great program and the prospect of it being disemboweled will have an extreme effect on our senior community.
One can only hope that the Fed will allow and LISTEN to the reverse professional.

I would like to know what is the overall tax default rate for seniors that own their homes free and clear now????…..Perhaps the whole tax default issue is the result of increased taxation that our seniors don’t have the addtional income to cover at tthis point in their lives. In Florida one of our P&C carriers just requested the state to approve a 25% increase to their property insurance rates. These types of massive increases were not anticpated in retirement planning, my point here is even if we were to have used credit criteria underwriting a person getting a reverse mortgage a few years ago may not have the ability to pay the increased tax & insurance rate hikes that we have today.

I’m hopeful that the new credit underwiting guidelines will hew closely to the goal or reducing tax & insurance defaults instead of simply adopting more comprehensive credit underwriting practices from the forward world. That’s an understated way of saying that we could document ability to pay and history of payments without a FICO score (I’d argue that excessive reliance upon Fair Issac scores are a major cause of the housing and mortgage industries ongoing crisis). A higher documented income level would minimize the need for documentation and minimize the risk of technical default for these borrowers. For the more marginal incomes, other asset (or other potential payors, like other family members) documentation might be useful.

I think this is going a long way around the situation to solve a problem…..credit worthiness!? How about a 2nd mortgage used specifically for Taxes, Insurance & occassional maintenance……to be paid back using same guidelines as the Reverse.

KISS (keep it simple stupid) No offense meant. Thank you.

How would that work? HUD already takes the second.

Whose money would be at risk, making those payments? What kind of interest rates should be charged?

Please explain the details of your idea. It looks practically, economically, and financially infeasible.

Keep it simple for one and all reverse mortgage borrowers that insurance and taxes are required set asides.

How about Set a side for a certain amount of yrs for just in case purposes if the borrower misses a payment. I would like to hear the problems with servicing that this may cause. I understand that by itself this is not a cure but just to throw that out there for everybody’s ideas. I think the credit/qualification is not going to go over very well at all nor will it insure future payments if the client qualifies…

There are a few ideas in this thread that seem both interesting and humorous but most serious suggestions seem to focus on set asides for taxes and insurance. Even one warns about killing the proverbial goose.

I think we all need to remember that less than a year ago we were hearing that the percentage of defaults was less than 1% or if more, certainly less than 2%. On February 2nd of this year Sue Hunt of CredAbility said there are 30,000 such defaults (or less than 6% of all outstanding HECMs). If Sue is right, then that means over 94% of all outstanding HECMs are current on tax and insurance payments. Until recently there has been NO concerted effort to determine how many defaults there are and how many of those are irreversible. If half of those can be turned around, the percentage in compliance on that issue could be as high as 97%. Real stats on how many defaults there are have yet to be developed and released. The determination of how many of the current defaults are irreversible could take 2 years based on the options given by HUD in Mortgagee Letter 2011-01.

Set asides of three years could amount to over 10% of the market value of the home in some states. This is a very serious issue. Imagine if a senior who was looking at a principal limit of 55% was told that after the set aside for T & I all he/she could expect is a principal limit of 45%. Some have suggested that the number of years which should be used for the set aside be equal to the generic life expectancy of the senior; imagine how large that could be for a senior who is only 62.

How many seniors would either be righteously discouraged or not qualified after paying off debt and liens? If your answer exceeds 6%, then why would we exclude a higher percentage of prospects than the percentage of borrowers currently in default? Who says that the ones who would be excluded from or discouraged from participating in the program are those most likely to default? No data we gathered in the origination process would identify dominant characteristics of those most likely to default. Why harm worthy and needy seniors on a basis that does not address the real issue, defaults?

Quite frankly, there is a reason for foreclosure. I strongly believe we are too scared of a reasonable solution to a problem which only impacts a very low percentage of HECM borrowers in this bad economic environment. My suggestion is to drop most of FIT, beef up the taxes and insurance payment portion of counseling, and at the same time treat ML 2011-01 as the minimum effort which should be applied to curing the tax and insurance issue. Then if the situation cannot be turned around through set asides, etc. — foreclose.

(For those who are not aware, we cannot market that there are NO credit requirements; there are. They are minimal but seniors cannot have an unresolved bankruptcy and may not be disqualified under LDP or GSA. What we do not have is a minimum FICO score qualification.)