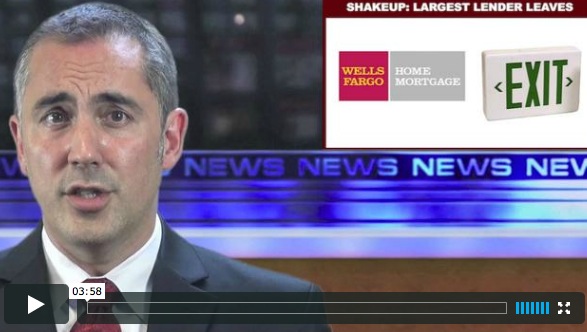 In another major shakeup for our industry, Wells Fargo announced today it’s plans to cease offering reverse mortgages after June 30th or the end of this month. There were rumblings of change this winter when Wells announced the closure of their wholesale reverse mortgage operations in March. Of course that decision sparked concern for many since Bank of America had left the reverse mortgage space the month before. Wells Fargo not only was the largest retail lender in volume and market share but also one of the early pioneers in marketing reverse mortgages. Having worked in the financial services industry my first exposure to reverse mortgages came about 12 years ago while visiting clients. Many had received folders from Wells Fargo with reverse mortgage proposals, brochures, educational materials and applications at times. Most of those I met were contacted by a Wells reverse mortgage representative over the phone. It seemed strange back then but seeing the shift toward call centers today it appears that Wells was far ahead in next generation marketing. The news for us came today shortly after we hosted a national webinar which many Wells Fargo loan officers attended. Needless to say many of our fellow originators are in a state of shock. Wells exit leaves a big vacuum for smaller and up and coming lenders to fill. Looking at these Top 100 Reports courtesy of ReverseBase, you get some perspective of just how large their market share was in recent years. Just over 26 percent total market share according to Reverse Market Insight. When it comes to reasons for their exit there is little speculation unlike that we had in February with Bank of America’s exit. According to Reverse Mortgage Daily, the decision was partly based on economic uncertainty, and increasing restrictions that make it difficult for lenders to determine a borrower’s ability to meet ongoing obligations of home ownership. There is also concern about the new Loan Officer compensation rule and expected increased scrutiny of larger banks by the newly created Consumer Financial Protection Bureau.  The question that comes to mind is this an opportunity or an omen? It really depends how you approach it and your belief in the viability of the reverse mortgage long term. Personally with more retirees unprepared to cease working and increased economic pressure I see a challenged but promising future for our industry. Another question to ponder is will we see some of these large lenders come back in better economic times? Perhaps. In the meantime lenders have an opportunity to serve a larger market. Competition makes our industry stronger driving innovation and improved service and Wells Fargo will has definitely played a large part in growing our industry over the last 20 years.

Square Peg in a Round Hole? New Disclosures:

Several episodes ago, we discussed the newly created disclosures which would combine the Truth in Lending and Good Faith Estimate into one easy to read form. Overall the response has been positive but some are concerned about the fitting a square peg into the round whole of the disclosure. The question the Mortgage Bankers Association poses is would products that don’t fit within the constraints of the form be able to be offered to consumers? Peter Bell, President of the National Reverse Mortgage Lender’s Association said “We feel that disclosures designed specifically for reverse mortgages should be developed, rather than trying to shoe-horn them into forward mortgage disclosures”. NRMLA is working to create a recommended format for a reverse mortgage specific disclosure which would be presented to the newly created Consumer Financial Protection Bureau. Seeing applications getting thicker often times with duplicate or repetitive disclosures some simplicity would be a welcome change for both the consumer and lenders alike.