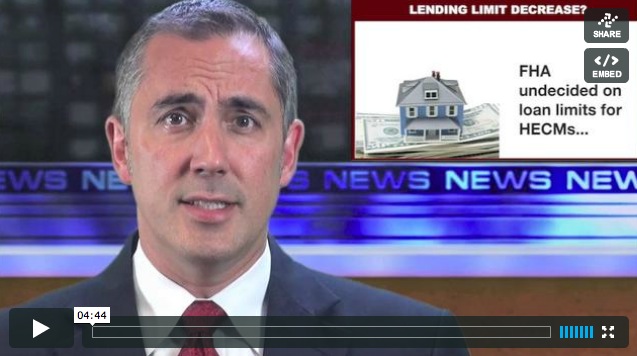 Will lending limits on reverse mortgages be reduced? The FHA is undecided on loan limits for HECMs and may be decreasing loan limits.

I appreciate your end to the Medicaid segment by advising originators to work with professionals who are versed in such matters. Over at RMD one commenter specifically pointed out that one state defines things differently. In one test lines of credit are treated as an asset of the Medicaid applicant. I was very surprised to read that confirming once again that I am no expert when it comes to Medicaid. Again working with professionals who are competent specifically on Medicaid is important.

Thank you Cynic. When it comes to Medicaid and reverse mortgages it can be a legal minefield.

You got that right!!!

With the last two full fiscal years showing conversion rates of 73% using a four month lag principle, it seems that the RMI 75%-80% rate range may be more lender specific or more seasonally unadjusted. Using a 12 month rolling forward total for the last twenty-four months of endorsements and the four month lag principle, conversion rates got as low as 67% once, as high as 75% twice, and the other 21 months stayed between 70% and 74%. However, the prior four months (specifically February 1, 2009 through May 31, 2009) showed percentages of 77% to 79% which are more in line with the RMI range.

It is also interesting to see that when the total endorsements for the last 39 months (beginning March 1, 2008 and ended May 31, 2011) are divided by the total of FHA HECM Case Numbers assigned in the 39 months beginning November 1, 2007 and ended January 31, 2011 the indicated conversion rate is 73.8% or about 74%. Some claim that the drop in the conversion rate has to do with the continuing declines in appraised home values versus applicant “guestimated” values used in applications. As can be seen the four month lag period and the muting of seasonality provide an interesting picture of where we are right now.

What gives credence to the 73% are three things. First, the percentages for both fiscal years were so close despite the huge drop off in endorsements. That came as a big surprise in calculating the numbers. Some prognosticators believed that the conversion rate was lower for last year than the year before. Second, the date which most companies target for being caught up on all of their work is their fiscal year end due to audit, consistency, and year end computations. Third, the thirty-nine month totals all but verified the overall computed fiscal year conversions rate and the difference was explainable based on “conventional wisdom.”

With applications at the all time low for any month in this fiscal year it is hard to believe that we will see the total of FHA HECM Case Numbers assigned during the twelve month period of June 1, 2010 to May 31, 2011 reaching the same total of FHA Case Number assignments as occurred during the same twelve month period ended May 31, 2010. May 2011 would have had to have been an exceptional month just to get to that total. As of April 30, 2011 the industry was well over 10,000 FHA Case Number assignments short of the total for last year during the same twelve month period. (June 1 to the following May 31 is generally considered the twelve period which creates the applications with FHA Case Number Assignments which will become HECMs and be endorsed in the fiscal year which ends four months later on September 30. In this comment it is referred to as the four month lag principle).

Until total of FHA Case Numbers assigned for the month of May 2011is released (normally in the fourth week of the following month), it is hard to say what the total endorsements for the current fiscal year will be. We definitely know it will not exceed 100,000 but right now even 84,000 seems far too optimistic. In fact unless the conversion rate is at least a few percentage points above its historical 73%, it may not reach 78,000 endorsements this fiscal year. This fiscal year could be the worst endorsement year in half a decade when there were just 76,351 endorsements for the fiscal year ended September 30, 2006. There were only 2,755 more endorsements than that total for the fiscal year ended September 30, 2010. NRMLA places that total at 79,106.

Can you please explain why HUD states the HECM limits are under review? If the lending limits extended under the Stimulus Act (ARRA, PL 111-05) are allowed to terminate and no new lending limit legislation is enacted, then it seems ML 08-35 goes back into effect reestablishing the lending limits everywhere but Hawaii, Guam, the US Virgin Islands, and Alaska at $417,000.

Certain people in the industry had conniptions when that ML was first released. To them ML 08-35 looked wrong from the beginning. However that all died down due to ML 09-07 which implemented the ARRA new limits.

If HUD viewed the lending limit statute as Freddie Mac does for which that provision is written, many areas in the contiguous states would have lending limits above $417,000 anyway. To those plagued by conniptions (including yours truly) except for ML 09-07, a single lending limit is the fiction of several proponents of such a limit. Reading the statute literally and in the same way as Freddie Mac, there is only a base not a single limit.

A comment is too limited to go into more detail. Others can make the case why ML 08-35 is an incorrect interpretation of HERA much better than I. I just know it does not “jive with” (meaning “match with”) the statute.

Dear Critic:: I will check on the particulars of this. I would agree that the ‘sunsetting’ of the stimulus act limits would most likely result in a $417K limit as you had mentioned.

You are not the first person to confuse The_Critic with The_Cynic. Lance Jackson gets around that by calling me Zorro. I do not know what his nickname for The_Cynic is. It must be really bad since I cannot remember ever seeing it used in public. But then the more optimistic really get along well with real cynics.

The Critic: Too funny. I guess many of us can be critics and cynics in today’s market. Glass half full or empty? All the best!

Thanks for the correction. Who wants to be known as The_Cynic? Just joking!!!

I find myself bewildered by the thought that any proprietary product could replace the HECM program on homes with values between $417,000 and $625,500. Practically speaking it is doubtful if the principal limit on a $625,500 value home could be matched by any proprietary product. In fact those proceeds would probably only begin to be matched by home values in excess of $1,000,000 and in some cases much more.

It is my opinion that if the lending limit was $417,000, overall reverse mortgage closings would drop even if proprietary products came back with a roar. While this might be good for some lenders, it would not be best for most seniors. If proprietary products work with higher HECM limits, that is fine. However, they should not replace them.

Making room for proprietary products makes no sense at all.